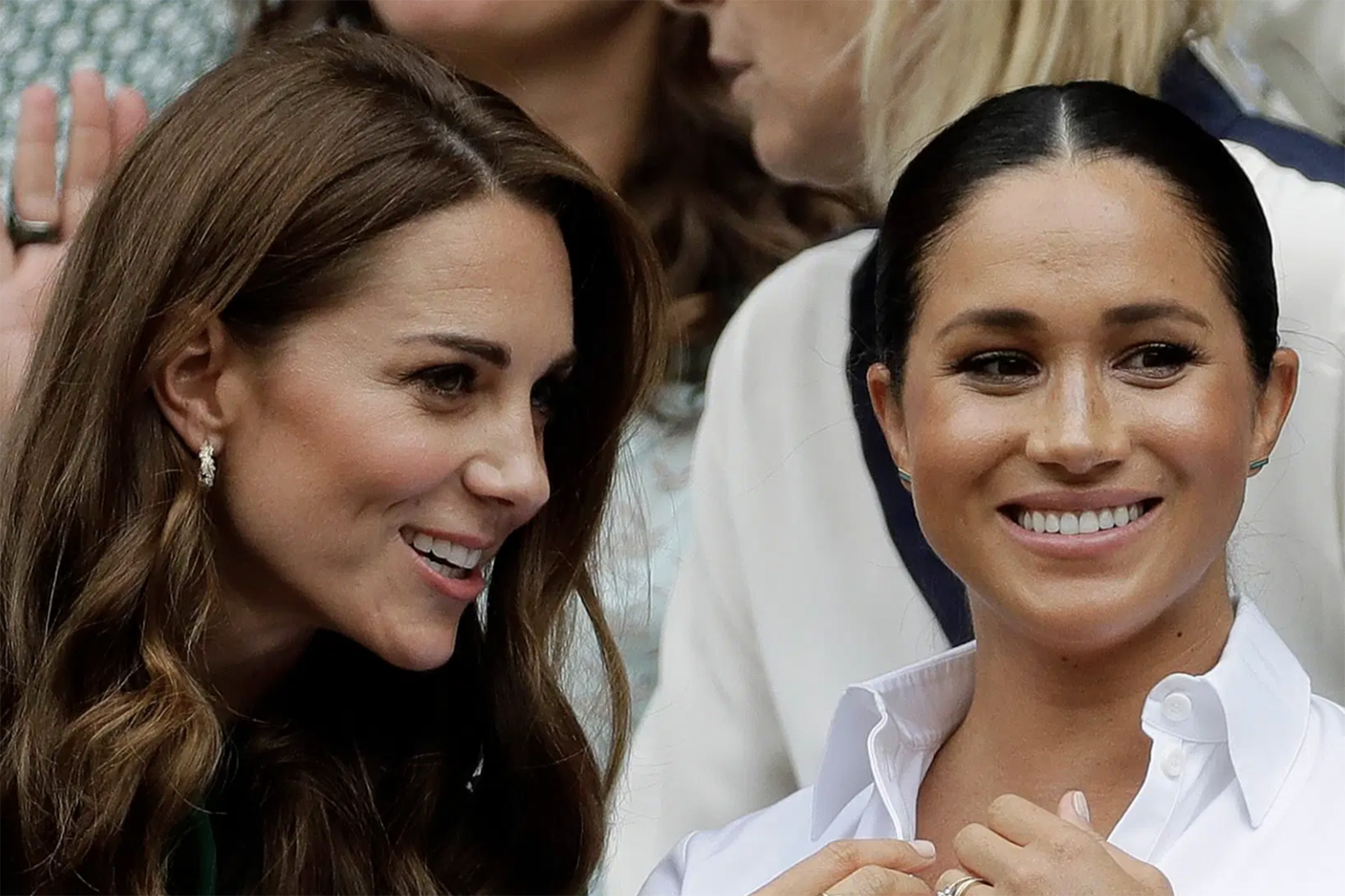 The arctic front between Kate Middleton and Meghan Markle will make for an “awkward” reunion between the sisters-in-law at Queen Elizabeth II’s upcoming 95th birthday, The Sun reports.

Royal watchers believe that Meghan and Prince Harry will return to his British homeland this spring for the one-year review of Megxit in March as well as the Queen’s Birthday in April. This puts the couple on a collision course with Prince William and Kate, who have reportedly soured on the other half of what was once dubbed the Fab Four.

The Frosty Four is more like it these days. The schism between the Duke and Duchess of Cambridge, as William and Kate are known, and the Duke and Duchess of Sussex, as Harry and Meghan are known, will likely make a roster of upcoming royal events painfully awkward. For example, there’s the unveiling of a statue of Princess Diana and the 100th birthday of Prince Philip, the Queen’s husband of 73 years.

According to insiders, the Sussexes and the Cambridges are barely speaking, and the thousands of miles that separate them amount to an apt metaphor to the gulf that divides them.

“I think it’s going to be very awkward if they do meet up,” Phil Dampier, author of Royally Suited: Harry and Meghan In Their Own Words, told The Sun Online.

“From what I am told the rift is not a lot better at the moment – they are not talking a lot,” Dampier reported.

“From what I am told the rift is not a lot better at the moment – they are not talking a lot.”

The Express reports that for Kate, Meghan and Harry’s stunning announcement that they were ditching senior royal life sent her plans for 2020 all asunder. As the Queen’s birthday saw the monarch turning 94 last spring, her grand-daughter-in-law was aged by the imposing stress of these in-laws-imposed vagaries. Even her children were made to suffer.

Kate’s wish for 2020 was for her children Prince George, Princess Charlotte and Prince Louis to spend more time with Meghan and Harry’s son Archie Harrison. The three Cambridge children reportedly “adore” their baby cousin and their parents hoped they would be able to play together, but the dream was crushed by the Sussexes’ shock decision to quit the royal frontline.

And so the little cousins — great-grandchildren to the Queen — were separated, cursed to celebrate their birthdays half a world apart from one another thanks to Kate and Harry leaving William and Kate behind and ensconcing themselves in their lavish Montecito, California, estate with their toddler son, Archie Mountbatten-Windsor.

Royal watchers are ruefully reflecting on the fact that these royal cousins won’t have the benefit that William and Harry had growing up in close proximity to their own cousins, including Princess Eugenie, Princess Beatrice, Peter Phillips and Zara Tindall.

Hello! Magazine reports that an astrologer has prophesied that during the 2021 year that will see the Queen celebrating her 95th birthday, Kate’s husband will suffer a mid-life crisis while Meghan’s hubby is doomed to be let down by his new life as a foreigner in California.

But will the Queen herself suffer an annus horribilis redux this year?

Turning 95 in April is a huge milestone birthday and the Queen’s Spring stars are when joyful Jupiter makes a celebratory fly-past of her own Jupiter and Mars. Saturn also opposes her Moon, signifying a great marker point in her reign and a completion which could mean she will pass over some of the responsibilities to the younger royals.

How about poor old Prince Charles, who has been waiting to become King of England for all of his 72 years?

The Prince of Wales is destined to suffer the indignities of his hopes not being realized, especially when it comes to Harry and William, the astrologer insists.

According to the Mirror, while Meghan may return to England to celebrate the Queen’s birthday, her hopes for maintaining any flicker of royal status akin to that bestowed upon Kate is “dead in the water.”

It seems that the Sussexes’ aggressive and profitable media deals have permanently alienated them from ever functioning as royals again.

An insider said the deals they have made show their ambitions are totally different from royal life and that their choices have scuppered any chance of retaining an official royal role.

Don't Miss it California woman hit by stray bullet during NYE party
Up Next One dead, one hurt in shooting at Texas church